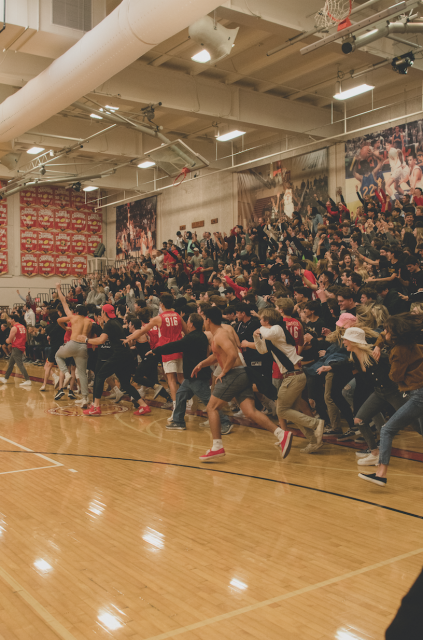 During my four years at Jesuit High School Sacramento, many memorable and impactful experiences will stick with me for a long time. One of the most memorable was one that happened this school year, at a basketball game, a few days after New Year’s Day.

It was the night of the iconic Holy Hoops game, the rivalry basketball game between Jesuit and Christian Brothers High School. The gym was packed, probably coming in a close second to the Holy Bowl in regard to the number of fans and volume of the game.

The visiting Christian Brothers fans took up an entire side of stands in the Fr. Barry Gymnasium, with extra people sitting in rows of chairs behind the court and among Jesuit fans on the home side.

I rolled up to the game pretty late, past the halfway mark in the third quarter, and the gym was so packed I almost couldn’t find my way in. Right when I walked in, I was hit by the vibrating bleachers and the extremely loud cheers. I thought, “This is something special.” This was the first high school basketball game I had ever gone to, and it made me wonder why I hadn’t gone to a game before.

I looked to my left and to my right, and I saw a tremendously large crowd on either side. There was a sea of blue and white on one side and a sea of black and red on the other. Then I looked up at the scoreboard, and I saw that Jesuit was leading by a score of something like 40-30 with about 2 minutes left in the third quarter.

I found my way to a spot to stand and watch, as room in the bleachers was practically gone by now. At this point in the game, Jesuit was dominating with layups and three-pointers coming off rebounds. The third quarter finished out and the lead remained roughly a 10-point one.

Some hilarious friendly banter began between some Jesuit’s cheerleaders and the family members of a CB player. This added more fuel to the fire, and gave even more importance to each and every play of the game. Fans from both sides of the gym cheered in wild excitement and gasped in disappointment. It was a grudge match of cheering.

Throughout the fourth quarter, Christian Brothers was slowly starting to make up their deficit, and the CB crowd continued to go wild as a few of their players started making great plays, including a lot of 3-pointers. CB also drew many fouls in the fourth quarter, but their free-throw shooting was inconsistent.

As a very high-quality and action-packed fourth quarter was coming to a close, Jesuit retained only a small lead. With about 10 seconds left, Jesuit had a lead of 48-45, but Christian Brothers had the ball at their end of the court. The pressure was on now, and history was just waiting to be made.

The whole gym seemed to go very quiet as the play began. A CB player dribbled the ball up the court and took it down the middle, then he dished it out to an open man who scored a 3-pointer with under a second in the game remaining.

The CB crowd went crazy, and the Jesuit crowd sat there stunned.

The celebration going on in the gym was reminiscent of the atmosphere of the Holy Bowl. Now, the game was heading to overtime and things were as exciting and tense as they can get.

Loud cheers and sounds of anguish continued from both sides. Chants were echoed from both schools; Jesuit chants “Isa Silva,” the Jesuit star who is missing this game due to injury, and Christian Brothers chants “Holy Bowl,” referencing their Holy Bowl win from a few months earlier.

The game was very back and forth, with both teams taking turns in the lead. The quality of the game matched the energy of the crowd. Things got so crazy that at times fans started inching onto the floor to celebrate big plays.

Gaining another infinitesimal lead at the very end of a period of play, Jesuit went up 60-59. With about 10 seconds left, the Falcons took it up the court, and Jesuit desperately tried to defend without fouling, and nerves were running high.

With 0.7 seconds left, a CB player got fouled outside the three-point line. The whole game was in this man’s palms.

This moment right now is my favorite moment of watching a sporting event at Jesuit. He shot the third free throw; it bounced on the part of the rim connecting the hoop to the backboard and went high in the air, bounced back down on the same spot and then bounced onto the ground.

Three free throws squandered and the score remained 60-59 in favor of Jesuit. Soon enough, the whistle was blown and the game was over. Jesuit wins. The CB crowd went into disbelief and produced a collective groan, while the Jesuit crowd went into euphoria and rushed the court. Insanity.