There isn’t much Coach Isaac doesn’t do 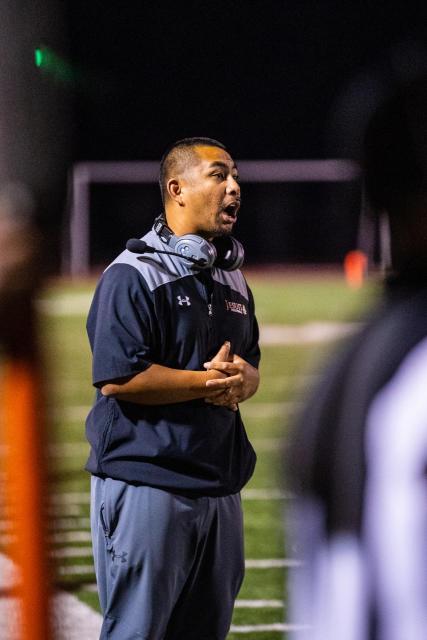 Holding the titles of prefect coordinator, VIP student coordinator, director of Academics Plus, and coach on the football and soccer teams at Jesuit High School Sacramento, there isn’t much Jonathan Isaac doesn’t do.

Coach Isaac began working at Jesuit after he was offered a coaching job by Head Varsity Football Coach Marlon Blanton in May 2012.

“He gave me a call, said he was getting a job here, and wanted me to come with him,” Coach Isaac said. “I said, ‘Give me two weeks to gather my things and I’ll be there.’”

While coaching football got Isaac a job at Jesuit, he’d already been coaching for years.

“I’ve always liked football,” Coach Isaac said. “I knew right out of high school I wanted to do something involving football, so when I was 19, I started coaching it.”

Coach Isaac had worked as an assistant for Coach Blanton since 2003.

With so much experience in coaching, it makes sense that others involved with the football program have nothing but respect for Coach Isaac.

“He is very observant and takes the time to try and figure out what makes each player tick,” said Dean of Students and Assistant Junior Varsity Football Coach Mr. LaRoddric Theodule. “He, like all of our coaches, cares more that his players develop into good men and not just good football players.”

“Coach Isaac is always the first person to say ‘I can take care of that for you,’” said Principal Mr. Michael Wood ’99. “He is a true servant leader who makes sure that whatever he is working on, whether football, prefecting, or Academics Plus, serves the needs of the student. He is a ‘students first’ employee, and Jesuit is lucky to have him.”

Coach Isaac attributes his success at Jesuit to multiple staff members, including soon-to-retire science teacher Mr. Ross Evans, who was a coach on the football team for 39 years.

“[Ross Evans] showed me the behind-the-scenes work that goes into prepping and running the various sporting events both on and off our campus,” Coach Isaac said.

Acting like a Swiss Army Knife, serving the Jesuit community in a multitude of ways, Coach Isaac is one of the many staff members who make Jesuit such a special place.