Alex Chen ’21, a dedicated student, ready for the future 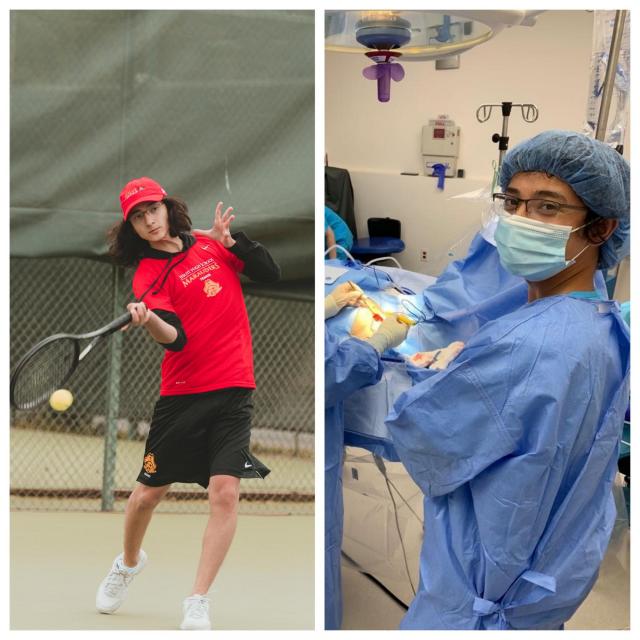 Talented, determined, creative, and hardworking are just a few words that can be used to describe Alex Chen ’21. From being co-captain of the tennis team to holding multiple internships, Alex’s versatility and commitment are truly remarkable.

In his four years at Jesuit High School Sacramento, Alex has grown as a person, student, and teammate.

“He’s always working really hard,” said DJ Hoang ’21. “He’s a really smart guy, but he’s also a really caring guy. I just like who he is as a person, it’s amazing, like it’s incredible … what he does.”

Tennis has been a big part of Alex’s life and he has competed on the Jesuit varsity tennis team since his freshman year. Playing for Jesuit helped reveal to him how the Jesuit brotherhood transcends the classroom.

“I had always thought that tennis wasn’t a team sport, there was no teamwork or stadium, nor excessive cheering,” Alex said. “When I began playing for Jesuit, I discovered a newfound sense of teamwork and brotherhood that I never experienced. It was a team battle, and suddenly my match wasn’t so personal. It was a collective battle, and winning or losing my match stopped bothering me, as trying my best for the sake of the team became my priority.”

JD Sedar ’21, who played doubles with Alex, enjoyed sharing the court with his teammate.

“I had so much fun playing with Alex,” JD said. “He is a very intelligent player and has a rocket forehand. We had many matches that came down to the wire and he was always very clutch.”

This year, Alex was one of the team captains, and he relished the opportunity to nurture the next generation of Jesuit tennis players.

“[B]eing the tennis team captain [was] really amazing,” Alex said. “I remember being a freshman on the team, and it was kinda nerve-racking with all of those junior and senior players above you. [As] the captain I feel like I can connect with those newer players and talk to them because I was in their shoes at one point.”

Evan Bird ’21, who was Alex’s Senior Retreat leader, notices Alex’s multiplicity and how he does all his work with creativity and purpose.

“First and foremost [I admire] his creativity,” Evan said. “His apparent music ability is what first shines about Alex, but it applies to his studies and athletic pursuits as well. I also admire his strong work ethic and critical thinking ability in all aspects of life. It makes him stand out from people who do not understand why they do certain things because he truly has a direction carved out for himself. Through and through Alex has proven himself to be humorous, considerate, and passionate in all things that he does.”

What is recognized by his peers is also noticed by his teachers. Math teacher Mrs. Antonia Doherty elaborates on what it was like having him in her class.

“I’ve been very impressed with obviously not only his academic side but seeing his ability on the tennis court, his focus, his leadership, he communicates clearly … he’s all-around a great student,” Mrs. Doherty said.

Alex has translated his skills from the classroom into multiple internships. Last summer at the Endovascular Clinic in Koreatown, Los Angeles, he “studied the electro-activity behind the interpretation of EKGs with a certified cardiovascular surgeon/cardiologist, and scrubbed into one open-heart surgery and two pacemaker transplants.”

This year, he worked with TeachAids, a non-profit affiliate of Stanford University.

“At TeachAids, I worked as a lead marketer for the write-ups of medical experts, managing the nonprofit’s social media and writing blogs on organizations and experts we partnered with,” Alex said. “To write these articles, I interviewed many of these experts, including Aparna Khare— lead speech scientist behind the Amazon Alexa — and Diana Anthony who is the Program Manager of the Stanford Neurological Simulation and VR Center.”

While Alex is an impressive student, his success wasn’t immediate. He explains his journey and the moment where he decided to fully apply himself — it’s something that he is most proud of from the last four years.

“[I’m] most proud of my development as a person and creating [a] work ethic and study habits,” Alex said. “I ended my freshman year with a C+ in Biology XL, and I felt I didn’t belong in these honors classes. However, after giving up video games, deleting certain social medias, and focusing on personal growth, I managed to create study habits and work ethic that ultimately lead me to [receive] over a 5.1 GPA my junior year.”

Alex brought that work ethic into senior year, taking multiple Advanced Placement classes along with maintaining his internship and everything else that senior year brings. Outside of those commitments, Alex still manages to keep up with and find time to do the other things that he loves, including making music, playing tennis, piano, and video games.

“I’m still working on a lot of music,” Alex said. “I haven’t released anything but I’m working on a big project that I’m gonna release over the summer probably, like eight tracks.”

As for the future, Alex is focused on becoming a doctor and will start his journey at the University of California, San Diego.

“With UCSD’s multiple hospitals on campus and a biological sciences foreign exchange program to the Netherlands, I have a lot to learn and look forward to,” Alex said. “I plan to graduate in three years with plenty of immersion at UCEAP — a study abroad for [the] fall semester in Maastricht University — and internships under my belt.”

It’s important to remember the journey for Alex has been an impressive one filled with new experiences and hands-on involvement. As he leaves Jesuit, Alex joins the Jesuit alumni who go off to do something great as a true man for others.