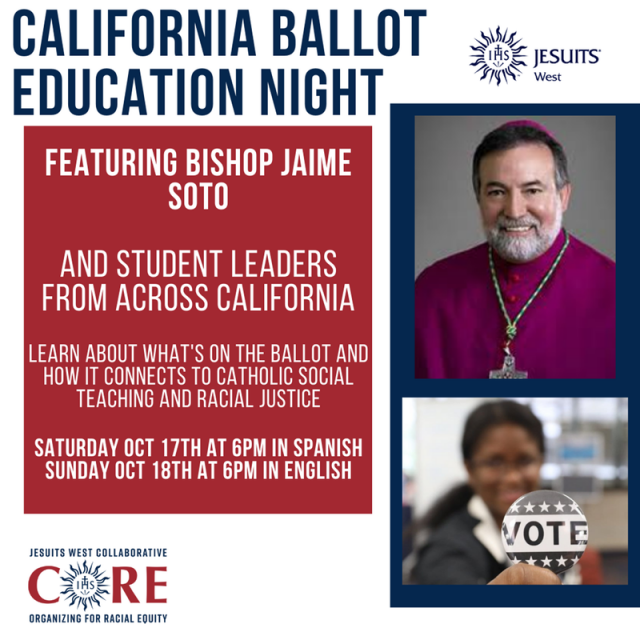 On Sunday, Oct. 18, Jesuit high school West Coast students hosted a Ballot Education Night as a way to gather and teach about the different aspects of the ballot and how California voters can impact law based on their vote on the various propositions.

Ms. Fox explained that the rationale for having an information night was to relate the importance of being aware of the power Californian voters have in the making of laws through the initiative process.

“We have to remember that, here in California, our ballot isn’t just about presidential candidates, during this Presidential election Californians will be asked to vote directly on at least 12 state laws that will have huge impacts on the lives of Californians,” Ms. Fox said. “The statewide ballot propositions will decide how much funding is available for schools and public services, the mandatory sentencing for minor crimes, who have access to rent control, and whether race can be considered a factor in hiring … Whether or not you feel moved by candidates, there is no excuse not to exercise your voice on ballot propositions.”

The focal point of the event came from information shared by student and adult presenters.

Bishop Jaime Soto, through video, urged voters to choose “No” on Proposition 20 stating that it perpetuates a system of incarceration and is a “part of the system of rational rejection” and urges for reform of the criminal justice system in the direction of restorative justice.

Parishioners from Dolores Mission and Co-Director of PICO California Mr. Joseph McKellar asserted that “Yes” be voted on Proposition 15 because it will help increase funding for schools and local governments and work towards making California more equitable.

Noah Sanchez ’23, who represented Jesuit Sacramento, agrees with the urgency of Proposition 15 stating that it “affects all Californians because it has to do with changing the formula for property taxes on businesses so schools, communities, and public services like fire departments, get more money. The state has a giant deficit right now because of the pandemic, and the services this initiative would fund are facing huge cuts unless this initiative passes.”

Jesuit Sacramento English teacher Mr. Peter Ferrari was in attendance for the event and described why voting matters to him, highlighting the message of civic responsibility.

“I disagree when I hear people complain about voting on ballot propositions,” Mr. Ferrari said. “I understand their frustration, as these propositions are incredibly confusing, and they are often purposefully misleading. However, I greatly enjoy researching these propositions and making the best choice possible. I recognize my privilege to be able to vote on the important issues on the ballot this November like our bloated system of incarceration, affirmative action, and voting rights. I will never miss an election, and I hope that you exercise your civic duty and vote in every election that you can!”

For eligible voters, voting season has begun in California. California voters can vote on the ballot propositions and the presidential election by mail or in-person on election day, Nov. 3.

The following are summaries from the night’s breakdown of the various propositions, information is paraphrased or quoted from the various presentations:

Proposition 16 seeks to restore affirmative action in public education and employment and reverse the 1997 Prop. 20 which amended the state constitution and ended the practice of  preferential treatment on the basis of race, sex or national origin. Catholic Social Teaching connects this proposition to the “option to the poor” which assists low-income minorities with education and opportunities in government.

Proposition 18 allows younger people to have a more substantial role in democracy by permitting 17 year-olds to vote in primaries provided that they will be 18 in the general election. This is related to Catholic Social Teaching’s “calls for family, community, and participation.”

Proposition 19’s implementation would give property owners older than 55 and those who lost their homes in forest fires the opportunity to transfer their former tax assessment to a new home  when they move and save a lot of money. Under Catholic Social Teaching, this is a call to family and community where housing can be affordable by transferring property tax.

Under Proposition 21, the local government can create rent control on housing beyond California laws. While the proposition addresses issues such as homelessness, there is also concern that its passage would have a negative impact upon the housing crisis. Catholic Social Teaching advocates for a “better option for marginalized and vulnerable” and ensuring human dignity through affordable housing.

Proposition 17 reinstates the right to vote to those who have completed prison terms and are on  parole. Racial equity is needed as the system disproportionately represents people of color. Catholic Social Teaching values “the right and duty of participation in society” and “emphasizes chasing the common good and well-being of others, specifically the poor and vulnerable.”

Presented as an example of the rich versus the poor, Proposition 25 changes the cash bail system, which disproportionately keeps poor people in jail, with an evidence-based risk assessment system. Catholic Social Teaching states that the priority of  “the needs of the poor and vulnerable” needs to be reflected in a just system rather than by divisions of wealth.

After a decision by the United States Supreme Court, California law had been changed to reclassify many professions from independent contractors to employees. In Proposition 22, drivers for companies like Uber and Lyft would remain as independent contractors. It is the belief of Catholic Social Teaching that “the dignity and rights of workers” be recognized by “decent and fair wages, productive work, organization and joining of unions, private property, and economic initiative.”

Proposition 23 requires that dialysis clinics for patients with kidney failure have one on-site physician during patient treatment hours. Catholic Social Teaching says that the “option for the poor and vulnerable and life and dignity of the human person” must be accounted for.

Proposition 14 will decide whether or not to grant more money for state funding on stem-cell research. Catholic Social Teaching does not support research on “embryonic stem cells” because it violates the dignity and sanctity of human life. The church does support “adult stem cell” research, but since this proposition is unclear on which type of research would receive funding,  the church is against it.