College in the time of Corona 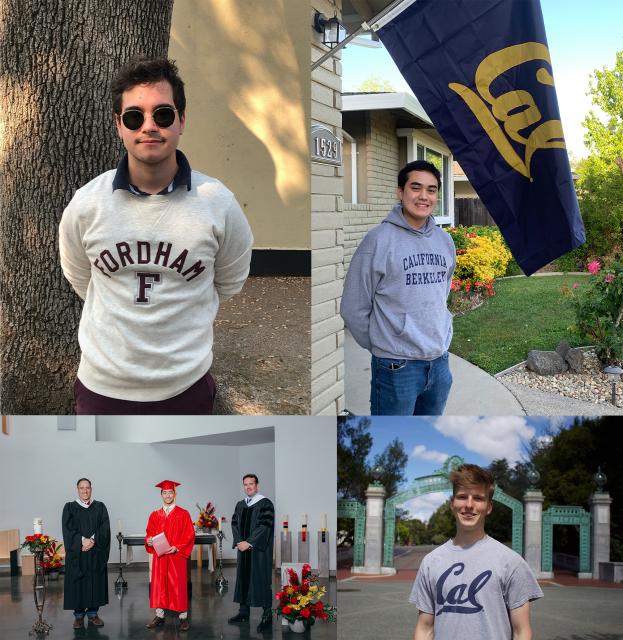 In response to the global COVID-19 pandemic, universities across America were forced to shift their plans, leaving newly-minted college freshmen with a decision about their futures.

After their final semester at Jesuit High School Sacramento was altered, the Class of 2020 had hoped to find normalcy in a new school year, but in a year of unpredictability, varying factors had to be taken into consideration with the announcement that classes were to be moved online.

Taking the adjustment in stride, Dean Babb ’20 changed the location of his studies from what would have been New York City to his remote classroom.

“For this year, I will be remote learning from home, and I will be taking Zoom classes from Columbia University,” Dean said.

For Michael Raff ’20, the change in plans led to the decision to transfer to Folsom Lake community college for online classes, but he finds solace in his new circumstances.

“My whole plans for the future have been turned on its head because of COVID-19, but I don’t see it as all bad,” Michael said. “I now have new and unique opportunities to focus on things I never was able to before, so we will see where that takes me.”

Some colleges allowed their students the choice of taking a gap year instead of virtual learning this fall. Salutatorian Jonathan Fong ’20, who plans on attending Fordham University, chose to defer for the fall semester, but anticipates waiting a year. Jonathan details how this choice has affected the normal transition to college.

“The pandemic has affected the transition process, as now I am stuck in this awkward position of not being a high schooler, but also not being a college student,” Jonathan said. “It feels as though I am stuck in time; however, I am not willing to sacrifice the quality of education that I would be receiving, so I have decided it is worth it to just stick out this year and hope for some sort of normalcy in the fall of 2021.”

The same decision was wrestled with by Donghwan Park ’20, the valedictorian, who ultimately chose to take classes from home.

“When Stanford ruled out on-campus for most students I considered taking a gap year but I decided to just take online classes,” Doghwan said. “I’m not too bummed about staying home this quarter but I hope I get to be on campus by winter or spring quarter.”

While some are staying home, others have journeyed to their school. Caelin Sutch ’20 and Aiden Baker ’20 are both attending UC Berkeley, taking online classes from different locations in the city.

“I’m living off campus in Berkeley in a house with 10 other guys,” Caelin said. “UC Berkeley is likely going to be virtual next semester, which really sucks, but thankfully I’ve been able to adapt and I’m pretty satisfied how my year has turned out so far.”

A part of what makes college special is being in the college environment. Aiden, who is living in the campus dorm rooms, describes how college life has been active while maintaining COVID-19 safety protocols.

“There’s always people out doing something — whether it is running, playing frisbee and trampling an unsuspected civilian in the Library courtyard, or getting a bite to eat with friends, there’s something anyone can find to do,” Aiden said. “Or you can just stay in your room and do nothing all day. It’s really up to the individual.”

Along with academics, athletics have also been interrupted due to COVID-19, leaving student-athletes with different training experiences amid hopes and doubts about a new season.

“No one is sure whether we’ll have a season this year or not and I’ll be training from home,” Doghwan said on the prospect of competing in fencing. “The financial effects of COVID-19 are also part of the reason why fencing got cut along with a third of Stanford varsity teams effective next season.”

“It is difficult if not impossible to train with others safely, so to keep up I have to do a lot of individual training and fitness,” Michael Raff, who plays soccer, said. “Lots of weights and running.”

“I planned on walking onto the track team; however, due to COVID-19 regulations, I, as well as all other prospective walk-ons who would be trying out in the coming month, will have to wait to an estimated January [start],” Aiden said. “I’ve been practicing with the freshmen who signed last year and we’ve been going to a local high school that is luckily open with a track.”

Since the COVID-19 pandemic has disrupted the usual transition from high school to college, students have had to adjust their plans and expectations to the new normal, sharing in their hope for safe return to in-person classes and the resumption of sports in 2021.