From high school to professional, Cameron Iwasa ’11 is the best on the field 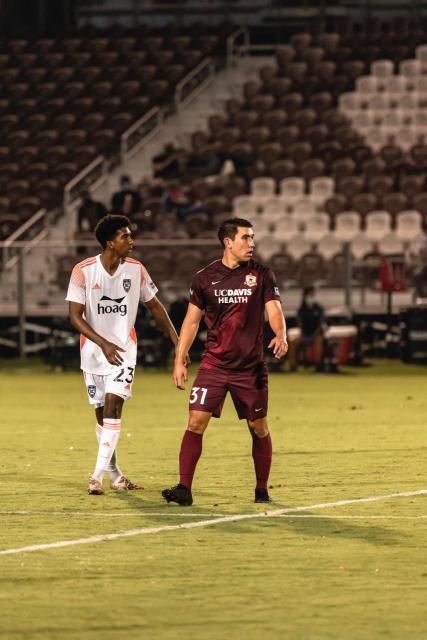 Jesuit High School Sacramento has built a reputation for producing high-level soccer players who go on to play in college, and in some cases, professionally.

While there are Jesuit alums playing soccer all over the country, Cameron Iwasa ’11 is competing right at home for Sacramento Republic FC. While the Republic is a relatively new club, hosting its first-ever game on April 26, 2014, Cameron is already one of the most notable players in the club’s history.

A forward for the team, Cameron is the Republic’s all-time leading goal scorer with 52 goals. He’s been the team’s top goal scorer in three separate seasons.

While Cameron’s success in recent years has been extraordinary, it’s not a shock to longtime Jesuit Varsity Soccer Head Coach Paul Rose.

“I am not surprised that Cameron plays professionally,” Rose said. “Cameron was always a hard worker. He is the second-leading scorer (single season) in the history of Jesuit with 42 goals.”

At Jesuit, Cameron was a two-time Sac-Joaquin Section Champion. He also won Offensive Player of the Year along with League MVP while playing for the Marauders.

When reflecting on his experience at Jesuit, Cameron is most thankful for the school’s supportive community, which he credits to the alumni, teachers, and his coaches.

“The whole mantra, the whole ‘Men for Others’ thing, over the years, especially when you get to your junior and senior year, you really see that start to set in,” Cameron said. “It stemmed from the Jesuit community, whether it’s the alumni, the teachers, or the coaches who had a big affect on it. Being around those people had a big affect on it.”

After high school, Cameron continued his soccer career collegiately at UC Irvine. In 85 appearances for the Anteaters, he scored 22 goals, a tie for the 10th most in the program’s history.

In his senior year of college, he was a semifinalist for the Mac Hermann Trophy, given to the nation’s top collegiate soccer player.

Cameron was picked in the fourth round (65th overall) of the 2015 Major League Soccer SuperDraft by the Montreal Impact. While he was cut by the team during training camp, he signed a professional contract with Republic shortly after.

In his second season for the Republic, Cameron had a breakout season, tallying 12 goals. Following his remarkable sophomore campaign, Cameron signed a Major League Soccer contract with Sporting Kansas City. Though he would never make an appearance for Kansas City, he played on loan for the Swope Park Rangers, an affiliate of the team.

After his one year stint with Kansas City’s organization, Cameron returned to the Republic ahead of the 2018 season. He would lead the team in goals in back-to-back years in 2018 and 2019. While Cameron has found most of his career to be enjoyable, the 2020 season wasn’t as fun due to the pandemic.

“We only played half the games we would play in a season,” Cameron said. “The league regionalized the whole thing. We had limited practices at times and got tested all the time. On the road, we were told not to intermingle and stay safe. It wasn’t as much fun as the season normally is. In Sacramento, we have one of the best fan bases in the league with all the people cheering and we didn’t get that energy this year.”

As Cameron mentioned, the fans are part of what makes playing for the Republic so rewarding. He expands on what their presence means.

“This community gets so excited to support their teams, and the awesome thing for me is that it doesn’t matter if they [have] a lot of success,” Cameron said. “The way this community rallies around something that is their own. That’s the most exciting thing.”

The engaged fan base is also one of the reasons Sacramento will become a Major League Soccer team with the construction of a $300 million downtown Sacramento stadium beginning in the Fall.

However, despite the community’s excitement about getting an MLS team, the Republic’s entry into the nation’s top soccer league won’t happen until 2023 because the COVID-19 outbreak has delayed the process.

With all the success he’s experienced, Cameron has advice for young soccer players hoping to also one day play professionally.

Only 27 years old, it’s clear that Cameron will have many memorable years ahead, and as soon as the pandemic ends, fans can pack the stadium again and watch the Jesuit alum dominate for his hometown team.