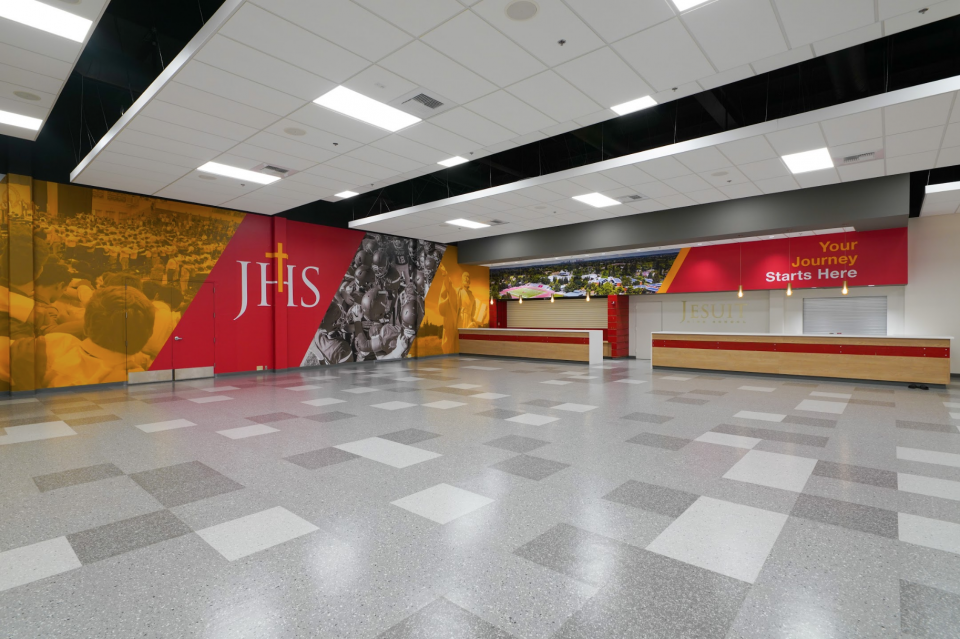 Since being constructed in the ’60s, Jesuit High School Sacramento’s Father Barry Gymnasium has hosted countless school masses, fundraisers, athletic competitions, and a number of different gatherings throughout the years.

While it has earned a reputation for being one of Sacramento’s most iconic high school gyms,  the Fr. Barry Gymnasium’s age was starting to show and “was very much in need of renovation and upgrading,” according to Jesuit President Father John McGarry S.J.

This summer, Jesuit finished the second and final phase of a $2.9 million renovation project. The first phase was completed during the summer of 2019.

Phase one focused on structural improvements which included the installation of HVAC units.

“The air conditioning has already improved the space dramatically,” said Principal Dr. Michael Wood ’99. “In previous years, we were forced to cancel events due to heat and this will no longer be the case.”

Phase two added “new lighting, a new sound system and other AV equipment, a new scoreboard, new bleachers, and a fully renovated floor,” Fr. McGarry said. “One of the other exciting things about the renovation of the building is that we renovated and repurposed what was called the ‘Little Theater’ into a ‘Welcoming Center.’ The whole project was four years in the making from planning to fundraising to design and construction.”

Out of the many renovations, the “Welcome Center” is believed to be the most important by Jesuit Athletic Director Mr. Hank Weinbeger.

“The ‘Welcome Center’ will have the greatest long term impact on Jesuit High School,” Mr. Weinberger said. “We now have a space that can be the hub for all of our admissions and alumni events on campus. In addition, it will serve as a great space during games where we will continue to have seating and it will now include our snack bar and retail space. Additionally, the goal of this space is to allow visitors to experience and learn about the history of Jesuit High School through our interactive zones in this space.”

The project was primarily led by the Facilities Committee of our Board of Trustees, representative, Mr. Dave Higgins ’78, and General Contractor Mark Read ’72. Other notable contributors were Brian O’Neill ’00,  Tim Fleming ’77, Bailey Fleming ’10, and Clyde Lagomarsino ’73, and Jim Mellas, the parent of a current student, Matthew Mellas ’22.

“Our gym was already a great place to play,” Coach Kelly said. “I hope the new and improved space will draw bigger crowds, especially students, and help us have a home-court advantage over opposing teams.”

When large in-person gatherings are allowed to take place, the gym’s new upgrades will be on full display to not only the Jesuit community but visitors from other schools as well. One event that hosts visitors from schools across the country and even from Canada is the annual Fr. Barry Classic Basketball Tournament. Both the gym and the tournament hold the name of the Fr. Joseph F. Barry, S.J. (1917-1987).

The upgrades will also help the Campus Ministry Department as school masses will be much easier to host.

“We are going to have a lot of new options with the gym renovation,” said Director of Campus Ministry Mr. Paul LeBoeuf. “The video screens are going to be easier to use, there will be a nice backdrop for masses, the bleachers will have designated staircases and railings, the sound is going to be great, and we will have lots of lighting options. There will also be carpet squares put down so the flooring will be nicer than the mats we used to use.”

A focal point on campus for multiple decades, the Fr. Barry Gymnasium is a place where the school can come together. While large gatherings are currently limited, it’s clear that once things open back up, the benefits of these renovations will be felt throughout the Jesuit community.

A glimpse at the newly renovated Father Barry Gymnasium