Jesuit students define what it means to be a Marauder 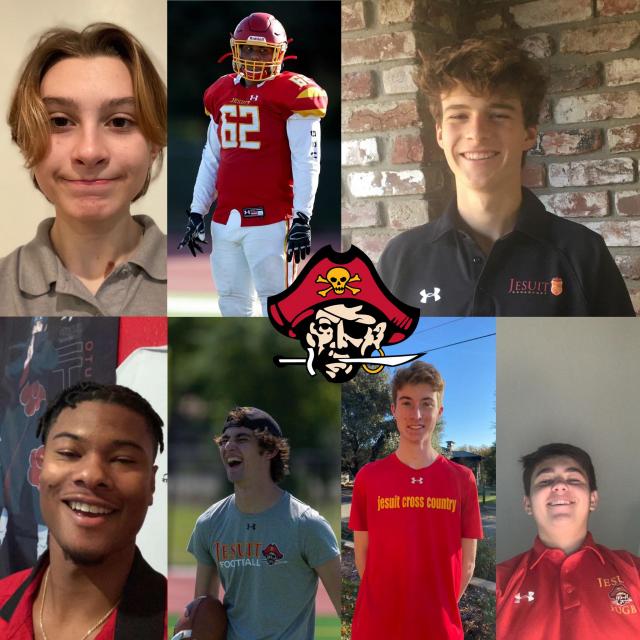 This latest edition of the “What it means to be a Marauder?” series comes from current students, who answer the question as it relates to them today.

Since the establishment of Jesuit High School Sacramento in 1963, the school’s mascot has been the Marauders. Now, 57 years later, in 2020, what does it mean to be a Marauder for students?

The name has become somewhat iconic in Jesuit tradition — a symbol of identity, brotherhood, school spirit, and used in verbal cries of passion and camaraderie in events such as Holy Bowl, a testament to the never-ending fighting spirit of a community. All grade levels, student-leaders, and student-athletes express that being a Marauder holds significant meaning, impacting the various aspects of their lives.

In a uniquely chaotic year, the meaning of a Marauder is unwavering, characterized by some as a reflection of Jesuit’s Grad-at-Grad mission.

“Being a Marauder in 2020 isn’t different in the ways that matter,” said Donavan Jasper ’21. “While the vectors of change and improvement are different, we still strive to be open to growth and committed to doing justice.”

For students both new and old, being a Marauder is intertwined with kinship, serving as a reminder of community — an idea shared by James Collier ’24 and Elijah Beverly ’21.

“Being a Marauder to me is embracing those around you and coming together to form a family,”  Elijah said. “This family loves you for who you are and wants to see you become the best version of yourself.”

The definition of a Marauder for Julian Martinelli ’23 encompasses all aspects of the full person and life including embracing the obstacles of 2020.

“To be a Marauder at Jesuit means I am seeking to incorporate Jesuit values and a desire to get closer to God in my social, academic, and sports life,” Julian said. “Being a Marauder in 2020 is to face everything coming at me with God in my heart.”

For student leaders, the experience of being a Marauder relates to growth and bringing what is learned into life. Executive Council Vice President Jake Hall ’21 contrasts his time as a freshman to his understanding now.

“I believe that the true meaning of being a Jesuit Marauder is someone who can prosper in life,” said Junior Class Secretary and Treasurer Christian Covert ’22. “Whether it is … playing [on the] field or in the classroom, Jesuit teaches how to succeed and be a ‘Man for Others’ for everyone.”

“During 2020 so far, being a Marauder has been about trying to connect with my classmates and keep the brotherhood alive,” said Sophomore Class President Jake Swanson ’22 on how 2020 has impacted the Marauder brotherhood. “It is really easy to forget what it’s like to be together while Distance Learning, and even easier to forget the memories and relationships we made during our seven months on campus. I think little things to keep in touch really make a world of difference.”

Student-athletes credit the Marauder spirit as motivation to succeed in all the different life roles they play and cite the honor of being able to compete for their school.

“To me, being a Marauder is giving maximum effort in everything that one does,” said Track and Field and Cross Country runner Michael Chambers ’21. “Whether it be in the classroom, in church, or in athletics, I’ve always noticed that Jesuit students always give their best effort in everything they do, no matter the circumstance. It’s very motivating to see this in action and it’s a big reason why I’m so proud to be a Marauder.”

“As a student and football player at Jesuit High School, being a Marauder brings pride and joy,” said Jack Hemmert ’22. “If I am in the classroom or on the field, I work my hardest to represent Jesuit and [that’s] what being a Marauder is all about!”