West Coast Jesuit students host meeting on voting: how to and why 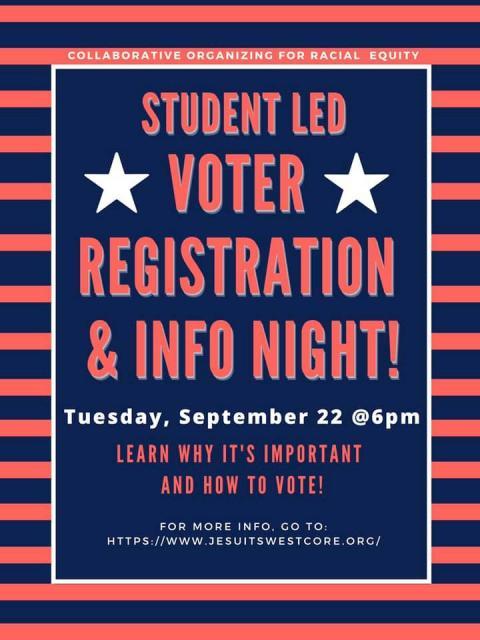 On the evening of Tuesday, Sept. 22, in honor of National Voter Registration Day, Jesuit High School Sacramento students were invited to listen to presentations from Jesuit West High Schools including Loyola High School of Los Angeles, Cristo Rey San Jose and Bellarmine College Prep on how they can vote, the importance behind it, and how they can be involved.

The event was coordinated by Ms. Annie Fox, the Provincial Assistant for Social Ministry Organizing for Jesuits West and Jesuits West CORE: Collaborative Organizing for Racial Equity. Throughout the meeting, students heard the varying perspectives on the reason for voting and learned information on how they can get directly involved.

The evening kicked off with a video message from Majority Leader of the California State Assembly, Ian Calderon and CNN Political Commentator Van Jones and students around the country who spoke on the significance of and reasoning for voting, which ranged from participation in American democracy to personal input on the elected officials.

“I think it’s important to vote because it’s one way we can help shape the kind of society we desire for ourselves and future generations,” Ms. Sara Brabec, Director of Service and Justice, said on the impact of voting. “Civic engagement can’t end with voting, but it’s an important place to begin.”

The presenting students covered the reasoning for not only voting in the presidential election, but also in local community elections as a way to be an active participant on meaningful issues and enacting change. They also included the urgency behind voting, showing statistics on the number of people who have voted in previous elections.

Students who are ineligible to vote were given the following suggestions on how to be conscious citizens and proponents for change: Be informed and educate, get involved, volunteer and take an active stance. Students who are 16 and 17 have the option to pre-register to vote.

Noah Sanchez ’23, who is involved with the Jesuits West CORE advocacy program, shares what he learned as well as the impact of being able to be involved as he continues his work.

“[I learned] that you can’t have service without advocacy-meaning, if you just give service, but you don’t advocate for change to the system that requires people to rely on service, you’re only doing half of the job,” Noah said. “It’s pretty cool that kids our age from the whole Catholic community are as engaged as they are. It’s been great to be a part of and to know that even though I’m too young to vote, I can be a part of advocacy efforts to bring change.”

Information on how to vote was discussed as well as the different actions that can be taken. All registered eligible voters will receive a mail-in ballot to cast their vote — an especially useful resource during the ongoing COVID-19 pandemic. Voting in-person is also an option and information on California polling locations can be found here. The option to vote early and as an absentee are also available.

The event concluded with the opportunity for students to register to vote. Ms. Brabec hopes that the information given will be impactful and a motivation for students to get involved as they move forward.

“I hope students took away the requirements for voter eligibility and the simple how-to’s of registering or pre-registering (depending on their age),” Ms. Brabec said. “I also hope students feel empowered by their peers’ examples of teaching each other and taking leadership in this work for justice!”

To be ready for the upcoming election on Nov. 3, students should note that the deadline for voter registration is Oct. 19 — all resources can be found online with some hyperlinked above. Additional informational sessions by Jesuits West CORE will be held on ballot education on Oct. 17 and 18.