Brothers in the Brotherhood 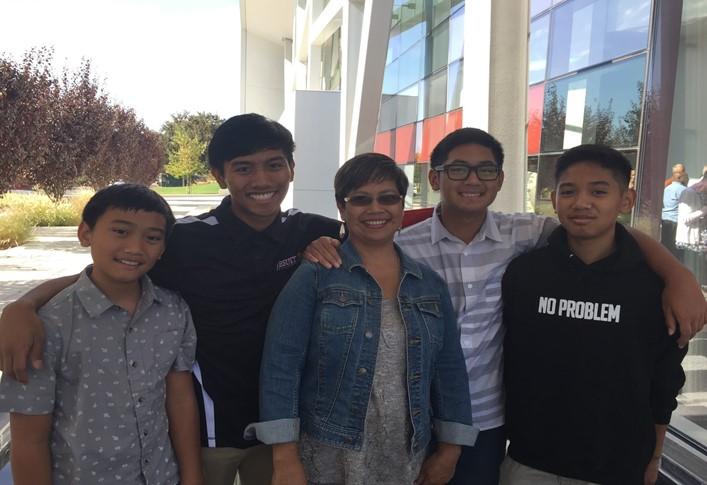 The Maulino family has five brothers who have attended Jesuit High School Sacramento. Two of them, Chris ’08 and Nathan ’18, are alums, while Gabe ’21, Jacob ’22, and Andrew ’24 are still enjoying what the school has to offer.

Gabe, who’s in his final year at Jesuit, credits the school with helping him grow as a person.

“Jesuit has allowed me to branch out as a person,” Gabe said. “I remember coming in my freshman year. I didn’t really know anyone, so I did a lot of things that my older brother did when he was a senior. I was a part of a lot of the clubs that he was in. It wasn’t until I really chose to do wrestling [that] I really started to branch out and become more of a person myself. After wrestling I started becoming more involved in other clubs, other things that I wanted to do, instead of what my brothers were doing. I became my own person really.”

Seeing the impact Jesuit had on him, Gabe has tried to help other students achieve the same level of personal growth — working as a big brother and as a member of the senior retreat team.

“I am taking the opportunity to kinda be a lot more involved with the students at Jesuit,” Gabe said. “I’m able to basically be a guide or a help to students at Jesuit, not just for school, but personal problems or just issues that they are having. I just like to be able to listen and hear how peoples’ lives are going.”

Aside from being a big brother and a senior retreat team member, Gabe is part of the Chamber Choir, symphony orchestra, is on the leadership council of the Asian-Pacific Islander club, and is the president of the Super Smash Bros club.

Gabe isn’t the only one of his brothers who has been positively influenced by Jesuit. Jacob also believes the school has helped him change for the better.

“[Jesuit has] made me more aware about other people and how they feel,” Jacob said. “[At my]… middle school I felt like everyone was really close, and you knew everyone. But with Jesuit there’s a wide variety of people from different cultures, from different backgrounds, and you really have to take into account what they have been through; and think about other people other than yourself. I guess [Jesuit has made me] more humble, more friendly, and just more aware of how people feel.”

One aspect of Jesuit that Jacob enjoys is the brotherhood.

“The fact that it’s an all boys school, it’s really like a big brotherhood and you just feel welcome,” Jacob said. “You can get along with anyone around you. There’s not really any cliques, I feel like you don’t have to dress up to be cool to like impress some people. It’s just not like that.”

The youngest Maulino brother, Andrew, may be new to the school, but he is still already getting involved, joining his brother Jacob in the Jazz Band.

Andrew is looking at his new start in high school as a new phase of his life.

Andrew also shared how fascinating it is that he and his oldest brother from the class of 2008 have been able to learn from the same Biology teacher, Ms. Julia Yang..

While it’s clear school has helped shape the Maulino brothers into the men they are today, Gabe says his mother has also had a strong influence on him and his brothers.

“My mom was a very big factor into how we’ve been taught,” Gabe said. “She has been a very strong influence in the way me and my brothers are.”

The Maulinos have grown during their time at Jesuit, always following what they enjoy doing. Four years from now all the Maulino brothers will be known as Jesuit alumni. As they continue their separate journeys, they will always be a part of the Jesuit brotherhood as well as their own.